We just had our first proper sort of pre-production rehearsal last weekend. We're going to record the basic tracks for the album totally live, so we really want to be in good shape musician-wise. We're also trying to simplify our playing now which forces us to think each one's parts again and again from fresher perspectives. So far it's been fruitful. I know it's common that bands usually have tons of songs to record and to choose for the album. We really don't work like that, I mean, it seems to help us concentrate on the songs we have currently better, if we have 10 we're confident about than to have 20 songs that we're not certain of. Now we're trying to make the songs we have sound as good as possible and we're just focusing on the little things and details. I DO have a lot of songs/demos on my computer but they don't have the same vibe, or spirit, that most of the songs on the planned album right now. Most of them are REALLY minimalistic and slow, maybe we'll save those for the future.

Or then we'll end up throwing most of our songs out of the window in the studio and start doing some weird experimentalslowcorepsychedelicrock?! Maybe we should live like Wayne Coyne to make it happen... And I wouldn't mind a bit, check it out:

...Oh and I just heard the new The National song, Terrible Love, sounds quite promising. Enjoy it with a huge dose of spring sunshine!

Posted by Rami/Delay Trees at 10:02 PM No comments:

Last night we had an amazing time in Hämeenlinna playing some good tunes with good bands to good people. Suisto-klubi is such a warm environment, plus the sounds are always amazing. Before the gig we chilled at Sami's office playing The Beatles Rock Band and Mario Kart and listening to great "70's Best of Rock Classics"-records. So all in all a very "rock'n'roll" start for the evening...

On Volcano sounded really good with their new songs. Very memorable songs were the groovy one "Lift your hands and praise the Lord", and the very last one of their proper set, "Rain falls" or "Rain drops" or something. Go check them out live if you have the possibility, really sweeeeet: http://www.myspace.com/onvolcano

Our own gig was good with loads of people singing along and dancing and having a good time. Unfortunately we were somehow lacking a bit of energy and didn't really get into the mood for the whole time. However we had loads of fun I guess and even played a brand new song called "4:45 A.M." for the very first time. It was nice...I guess.

Below you can check a few photos of us (and our friend Ville) relaxing at Sami's loungy office, while listening to the live version of Resurrection of Sonic Blue (Yeah, I know the drums are kinda loud). 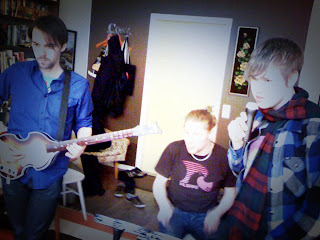 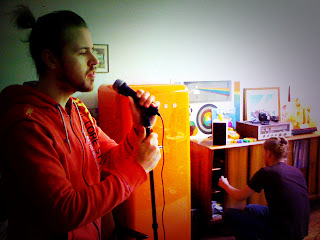 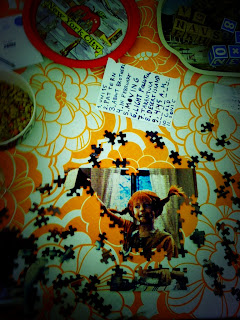 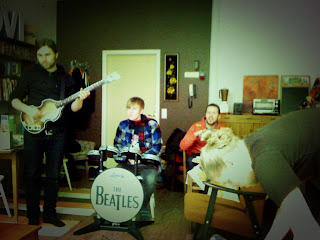 Posted by Rami/Delay Trees at 8:53 PM No comments:

Yo Yo Yo, we're now part of the blogosphere with our official band-blog.
I simply got fed up with the very limited MySpace-blog and therefore am really excited to share all the stuff that comes to mind in here.

We just had our first album pre-production meeting a few days ago with our recorder/co-producer and I'm feeling really good with the whole thing. At least NOW I am, I'm such a rollercoaster ride with my feelings and sometimes I'm too stressed about the songs not being good enough or whatever... Oh, well, we'll be heading to the studio in a few months and we're totally stoked about getting to record something, hopefully something meaningful that we can be proud of. I guess the first "single" will be released in the late May/early June. Till then, take a look at these videos if you haven't already checked them out and enjoy the revival of Spring!